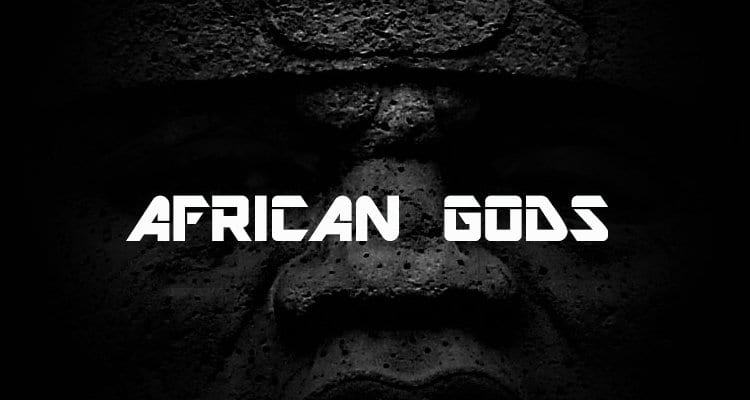 I just finished watching the most complicated series I have ever seen in my life. I know of so many people that gave up on it after about two episodes but since mystery has always been my thing I held fast till the end. American gods, I’m sure some of you who have seen this series can attest to its complexities but one god struck me most… Anansi. I realized how little I knew about African traditional gods so I decided to do a little research. African deities: Here are 6 traditional African gods that are slowly being forgotten.

Libanza is an African creator god of the earth and moon. When it was time for the people of the earth and moon to pay homage to him in heaven, the moon people quickly arrived in flocks and were rewarded with immortality. That is why after the moon dies, it is reborn. The people of Earth however, were sluggish and arrived late and Libanza saw this as a sign of disrespect and rewarded them with death. However, he allowed the earth people into heaven after death if they lived good lives. I really don’t know much about the moon people though.

He is an African god of nature and animals. He had a pretty weird birth and on a scale of 1-10, I’d give him 11. Here’s why. According to legend, his mother was a cow that ate some magical grass which turned out to be filled with a lot of testosterone. She became pregnant and Heitsi was the product. Humans are his best animals and according to folklore he is an awesome shape shifter. He is worshipped by the Xhosa people of South Africa, Khoikhoi people and Nama people of Namibia.

The African creator god of vomit. Lol and no I am not kidding. In the beginning all was dark and out of the dark appeared a pale skinned figure Bumba. He had been alone for millions of years and this solitude had made him ill. Troubled by a serious belly ache, he vomited the sun, moon and stars and finally with one serious effort threw up the earth. What a sick world we live in. To conclude the vomiting saga he threw up nine animals, different humans and a pile of diced carrots and watched them evolve to every living thing on earth. Bumba is a Congo god and so far as I know his stomach has not troubled him again.

The god of peace justice and the Yoruba way. He is the great king of the universe and the pinnacle of the Yoruba culture. Like the Hebrew Yahweh he is also three in one God comprising Olorun (god of heaven), Olodumare (the ultimate creator) and Olofi (the messenger). As a supreme deity his fame has reached even the Caribbean. He is regarded as one of the greatest African Gods by the yorubas.

Engai is the supreme Maasai tribe sky god. According to the Maasai people, in the beginning Engai lived on earth harmoniously with his cattle but one day a catastrophe occurred suspected to be a volcanic eruption sent him and his cattle packing into the sky. When he realized there wasn’t enough grass to feed his cattle in the sky he called out to a human called Nateiru-Kop and gave him all his cattle. Naiteru-Kop was pleased and founded the Maasai tribe. The Maasai believe that they own all the cattle in the world and this is a perfect excuse to rustle cattle from neighbouring villages. To them it’s not cattle rustling but cattle rescuing. Preposterous!!!

Anansi in the Akan language means spider. West Africans originally held Anansi as the creator of the world and gave his full name as Kweku Anansi. The Kweku in his name meaning Wednesday as the day his spirit first appeared. Anansi is one of the most popular african gods. As well as being a trickster he is also believed to have made the sun and moon and had the original novel idea of day and night. He is also known as a great story-teller. Guess this spider does spin tales.
These are just a few of them in a rank of so many but look out for more and maybe Anansi can help us spin our own African version of American gods. Cheers.