Many Hollywood films have been shot in Morocco. Many movie fans and moviegoers have seen numerous movies scenes set in Moroccan territory, and it’s beautiful landscapes. The first were by the French film pioneer Louis Lumière Le chevrier Marocain. Morocco has become a major movie set for many foreign films – it has been almost everywhere in Hollywood films. Here’s a list of top Hollywood movies shot in Morocco.

We also recommend our guide to the important things to know before visiting Morocco.

Othello (also known as The Tragedy of Othello: The Moor of Venice) is a 1951 drama film shot in Morocco. A film adaptation of William Shakespeare’s play, directed and produced by Orson Welles, who also played the title role. Othello was filmed over a three-year period in Morocco, Venice, Tuscany and Rome. One of the fight scenes starts in Morocco, but the ending was shot in Rome. Othello contains other several memorable scenes shot in the labyrinthine streets and alleys of the medina. Today, there is ‘The Orson Welles memorial’, in the town – located in a small square just outside the medina walls close to the sea.

Queen of the Desert is a biopic of Gertrude Bell, starring Nicole Kidman, film written and directed by Werner Herzog. The film is based on the life of Gertrude Bell – a British traveller, writer, archaeologist, explorer, cartographer. Gertrude was a political attaché for the British Empire at the dawn of the twentieth century. Production and filming took place in Marrakesh and Erfoud and, in Ouarzazate, Morocco. After Morocco, filming moved to London. A major portion of filming took place in Morocco. Fifty actors (apart from main cast), more than 1,500 extras and 65 technicians, all Moroccan, participated.

Lawrence of Arabia is a classic film based on the life of T. E. Lawrence, the English officer who successfully united and led the diverse, often warring, Arab tribes during World War I. The film is directed by David Lean, starring Peter O’Toole and Omar Sharif. Some of the scenes in the movie were shot in the Morocco. The epic massacre of the Turkish army scene was filmed in Ouarzazate, Morocco. It is widely considered one of the greatest and most influential films in the history of cinema.

Alexander is a historical drama starring Colin Farrell, Angelina Jolie and Val Kilmer. Directed by the legendary film maker and Academy Award winner Oliver Stone. Alexander, the King of Macedonia and one of the greatest military leaders in the history of warfare. The Macedonian horse market scene was shot near Essaouira. An entire set was built in Marrakech to create the majestic gates through which Alexander the Great makes his triumphant entry into Babylon.

The Mummy is a remake of the 1932 classic horror film of the same name. Directed by Stephen Sommers, starring Brendan Fraser and Academy Award winner Rachel Weisz. Production was carried out in Moroccan desert – filming lasted seventeen weeks; the crew had to endure dehydration, sandstorms, and snakes while filming in the Sahara. Two years later, “The Mummy Returns” to Morocco again as the sequel due to the box-office success.

Babel is a drama film directed by Academy Award winner Alejandro González Iñárritu and written by Guillermo Arriaga. Tragedy striked a married couple on vacation in the Moroccan desert, touching off an interlocking story involving four different families. Filming locations in Morocco included Ouarzazate, and Taguenzalt – a Berber village in the foothills of the Atlas Mountains.

American Sniper is a 2014 American biographical war drama film based on the memoir of the most lethal sniper in U.S. Military History directed by Clint Eastwood and written by Jason Hall. The scenes in Iraq were filmed in Rabat, Morocco. American Sniper is the highest-earning war movie of all time.

What is the story of this Jewel? The Jewel of the Nile is an adventure romantic comedy movie and a sequel to the 1984 film Romancing the Stone, directed by Lewis Teague, starring Academy Award winner Michael Douglas. Several filming and production was carried out in Morocco, including the scene – gateway that the plane crashes through (Ait Benhaddou, Morocco).

Mission: Impossible – Rogue Nation is a 2015 American action spy film co-written and directed by Christopher McQuarrie. Ethan and team take on their most impossible mission yet, eradicating the Syndicate – an International rogue organization as highly skilled as they are, committed to destroying the IMF. Filming locations in Morocco include Agadir,Rabat, and Derb sultane, Casablanca. Ethan Hunt (Tom Cruise) chases Ilsa onto the highway was filmed on the A7 Autoroute Casablanca–Agadir expressway. Marrakesh Highway was closed for 14 days for filming – additional filming took place in The Marrakesh Stadium, and Kasbah of the Udayas, in the capital city Rabat.

Set in the Middle East, it follows, a CIA agent on the ground in Jordan hunts down a powerful terrorist leader while being caught between the unclear intentions of his American supervisors and Jordan Intelligence. An American action spy film directed and produced by Ridley Scott, starring movie icon Leonardo DiCaprio, Russell Crowe, and Mark Strong as the three principals. Production moved to Morocco, and several scenes were filmed in Moroccan desert, around the city of Ouarzazate. Entire set was built at the basketball stadium in Rabat was used to recreate the U.S. embassy in Jordan. Filming crew and casts were allowed to the Ministry of Finance, which was dressed as Jordan’s secret service headquarters, Casablanca airport and a military airfield.

Watch the trailers from these amazing Hollywood films shot in Morocco below: 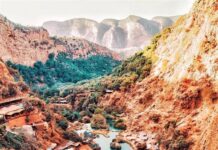 20 best places to visit and destinations in Morocco 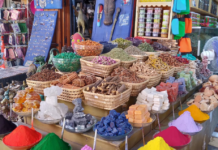 The Best Markets in Marrakesh