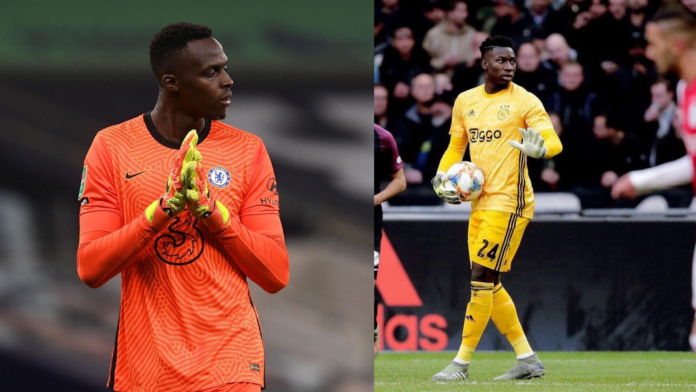 Who is the best African goalkeeper in the world right now? First choice for club and country, Mohamed El Shenawy’s return to the Al Ahly changed the course of his career, he tasted continental glory in the CAF Champions League, and earned his side their place at the FIFA Club World Cup Qatar 2020. As the only African goalkeeper in the Premier League, Edouard Mendy sits in a crowded field of top goalkeepers in the English Premier League. Find out which stoppers come up top in our run-down of the best Africa’s goalkeeper.

The 27-year-old Senegalese shot-stopper, Alfred Gomis has been one of the most reliable African goalkeepers in Europe over the past few years. On 29 September 2020, the Senegal international glovesman arrived Stade Rennais FC on a five-year deal worth between €14m to €16m.

He was a huge part of Dijon FCO’s defensive mastery that helped them avoid relegation, and fully deserving of his spot in this list.

Andre Onana is a supreme goalkeeper when it comes to stopping the ball going into the net. A calming presence at the back for Ajax as they have pivoted to a side built on their defence when they reached the Champions League semifinal in 2019. Sure, we could talk about his 15 clean sheets out of 39 games across all competitions during the 2019/20 season.

The 24-year-old Cameroon international was linked with Chelsea and Borussia Dortmund. But in February 2021, Onana was given one-year doping ban by UEFA after failing out-of-competition test – the doping suspension applies to all football activities. André Onana remains one of the most-wanted goalkeepers in Europe.

Al Ahly SC and Egypt goalkeeper Mohamed El Shenawy, is arguably the best African goalkeeper right now. He’s proven his worth with a series of miracle performances to allow the Al Ahly win the continental treble; the Egyptian Premier League title, Egyptian Cup and CAF Champions League trophy in the 2019/20 season. Their third treble, the most continent trebles in history of African football. Al Ahly is by far the most successful team in African Cup history, having taken home the prestigious CAF Champions League trophy a total of 9 times.

His colossal performances earned his side their place at the FIFA Club World Cup Qatar 2020. Mohamed El Shenaway saved two penalties in the shoot-out to allow Al Ahly beat Palmeiras 3-2 on penalties, and finish third at the FIFA Club World Cup Qatar 2020. And was named Man of the Match by FIFA. Shenawy is also Al Ahly’s captain, so you know he’s a good leader as well.

In September 2020, the 28-year-old goalkeeper joined Chelsea in a £22million deal from Rennes. Mendy conceded just one goal in his first seven appearances in a Chelsea shirt, and became the first Chelsea goalkeeper to kick off his Premier League career with three clean sheets since Petr Cech in 2004. He posted an impressive 5 clean sheets in a row, the first for the Blues since 2010.

Chelsea has finally worked out that having a worthy goalkeeper will improve their chances of competing for title in Premier League, and Champions League. His miracle performances at Stamford Bridge, has given Thomas Tuchel’s unbeaten start at Chelsea. They remain unbeaten in eight matches under the German. And in this regard, Mendy is supreme.

Everything You Need to Know About Africa Cup of Nations 2019